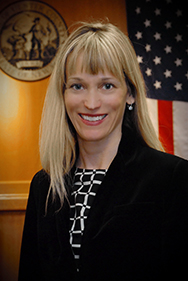 Legislator,
District No. 16 - Town of Gardiner, Town of Shawangunk

Tracey Bartels was first elected to the Ulster County Legislature in 2003 and served from 2004 through 2007 when she declined to run for re-election. After a two term hiatus, during which she pursued her career, traveled extensively and started a family, Tracey came back to the legislature in 2012. "I am thrilled to be back. I found that I truly missed it. It really is a unique honor and a special experience representing your constituents and serving your community."

Tracey graduated from New York University's prestigious Tisch School of the Arts with honors and a degree in Film and Television Production. She is an award winning filmmaker and member of the Writer's Guild of America. Most recently, Tracey worked on a feature length documentary about poverty in the United States.

Tracey is known as a fiscal conservative and an environmental advocate. During her previous terms, Tracey recommended millions of dollars in real cuts, more than any other legislator. Since her return to the Legislature, Tracey has worked hard to fight any tax increases. County property taxes were actually lowered for the first time in over a decade - no small feat in these economic times. Additionally, over 27 million dollars was cut from county spending - a historic cut, the most significant since the 1600s. This budget cycle proposes no increase. "I don't see this as a time to breathe easy. I will continue to search for efficiencies and cost cutting measures. We have to balance the importance of delivering much needed services against the real financial pressures faced by our tax payers." Tracey supported tax exemptions for seniors, veterans and the disabled.

Tracey believes in open government. She fought to end closed-door meetings on county property - a common practice before her first term. She co-authored the resolution that finally brought an end to closed-door and public light to all county meetings. More recently, she brought forward a resolution that required both that committee meetings be audio recorded and that the audio recordings be posted online for public review. Tracey also was instrumental in creating a property tax bill insert in order that taxpayers know exactly where their money is being spent - the first of its kind in Ulster County.

During all of her terms Tracey has been a member of the County Environmental Committee in all its changing forms.  Tracey has a long record of being an environmental advocate. She authored a resolution to require that all county funded new construction of public buildings be designed and built to a minimum standard of Leed Silver - now county policy. She moved to dedicate Ulster County an Energy Smart Committee and to have NYSERDA audit county buildings for efficiency. Tracey also authored a resolution seeking requests for proposals on rooftop solar installations. That resolution stalled when she left the legislature. "Solar installations are something I would like to pick back up and examine. Technology has changed and improved. Ironically, had we moved forward with the project at that time, it would have paid for itself by now due to the drastic increase in fuel cost. This is something both environmentally responsible and fiscally sound. We are stewards of this county and should lead by example."

Tracey supported the update of the County's Open Space, something not undertaken since the 1970s. She also brought forward the Ulster County Neighbor Notification Law, setting countywide requirements for commercial and residential lawn pesticide applications. Most recently, Tracey supported the ban of hydrofracking fluid on county roads - something that received unanimous bipartisan support.

"The scenic beauty of Ulster County is what first brought me here, nearly 25 years ago. I am continually awed by the world around me. No matter how many times I look at the ridge, it takes my breath away." It was the place that brought her but the people that kept her here. "I started my family here and plan to raise my daughter right here in Ulster County. I can think of no place that I would rather be."