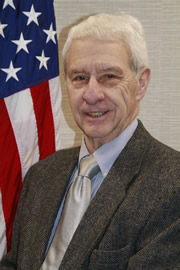 Legislator,
District No. 22 - Towns of Denning, Hardenburgh, Olive and Shandaken

John Parete is a proud business owner and community servant.  With his wife Barbara, he is co-owner/operator, of the Boiceville Inn located on Route 28 in Boiceville.  For over forty years, this family owned and operated restaurant has been a meeting place and celebration location for generations of families.  Often over a beer or burger, John has listened and responded to the concerns of the community.

John is a dedicated family man. He’s enjoyed more than 50 years of marriage to his loving wife, is the proud father of four adult children, and is a doting grandfather of seven! He has repeatedly spoken about how fortunate he is that his children all live in Ulster County; making him luckier than most. One of John’s priorities in the Ulster County Legislature is focusing on effective economic development that provides real opportunities for good paying jobs to keep families right here in Ulster County.

Second only to family is John’s commitment to public service. John spent many years as a volunteer firefighter, and baseball and football coach in the Onteora School District. Since the 1970s he has served the people of Ulster County in various professional capacities, including Ulster County Director of Personnel, Purchasing Director, Finance Director, member of Ulster County Resource Recovery Agency Board of Directors, appointee of Governor Andrew Cuomo to the Olympic Regional Development Authority, Ulster County Democratic Committee Chairman, and Ulster County Board of Elections Commissioner, to name just a few.

He joined his sons, Robert and Richard, in the Ulster County Legislature in 2012, when he was first elected to represent the residents of the Towns of Denning, Hardenburgh, Olive and Shandaken. He served as Chairman of the Legislature from 2014 – 2015 and continued to serve as District 22 Legislator through 2017.

John returns to the Legislature with the vast knowledge he has developed over decades of community and public service.  He knows what it’s like to run a business, employ workers, pay bills, volunteer in the community, coach sports, and work across party lines to accomplish things that make a real difference in the lives of hardworking Ulster County residents.

His priorities remain developing affordable housing for residents, especially seniors and young adults, addressing the opioid crisis, focusing on economic development and job creation through investment in infrastructure, and supporting the Ulster County Community College. He proudly wears an apron displaying a vote for the PIZZA PARTY and asserts that he will work with anyone, regardless of party affiliation, whose focus and intention is to serve the people of Ulster County.