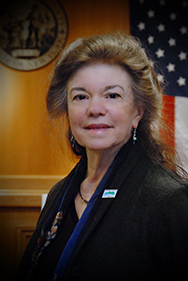 Legislator,
District No. 19 - Town of Marbletown, Town of Rosendale

Manna Jo Greene, Hudson River Sloop Clearwater’s Environmental Action Director since 2000, previously served as Recycling Coordinator/Educator for the Ulster County Resource Recovery Agency for more than 10 years and a registered Critical Care Nurse for 22 years. She holds an AAS in Nursing from SUNY Ulster, a BA in biology (pre-med) from SUNY New Paltz, and completed course work toward a Master of Science in Environmental Policy at Bard College.

Since 2014, Manna has served as Ulster County Legislator from District 19, representing the Town of Rosendale and part of Marbletown. She chairs the Legislature’s Energy and Environment Committee and the Ulster County Climate Smart Committee, serves as Deputy Chair of Public Works and Capital Projects, is a member of the Trail and Rail Advisory Committee and previously served as Vice-Chair of the Ulster County Environmental Management Council.  In addition, she coordinates the Mid-Hudson Regional Sustainability Coalition's Energy Working Group, which is developing a seven-county Regional Renewable Energy Implementation Plan.  Prior to joining the Legislature, Manna served on the Rosendale Town Council for eight years and previously chaired the Rosendale Environmental Commission.

A lifelong environmental professional and community activist, Manna cut her teeth as an organizer in the Civil Rights movement, as one of the founders of the Bridgeport, CT chapter of the Congress of Racial Equality (C.O.R.E.), and has worked for social, environmental, and, more recently, climate justice ever since.   As a teenager, Manna worked with Dr. King and other civil rights leaders of the day to lobby for the passage of the Civil Rights Bill, an event that has empowered her for life.

Manna avidly supports collaborative land use planning and problem solving. Working to promote green building and renewable energy projects and practices, she teaches communities how to integrate environmental preservation, economic prosperity (based on quality of life indicators), and social equity using effective communication.  She is a trained Climate Reality Leader and a member of the Hudson Valley & Catskill Climate Reality Chapter.

She currently serves on Citizens for Local Power’s Kitchen Cabinet, working to help communities in the Mid-Hudson region transition to a locally based clean energy economy, and is a member of EPA's Community Advisory Group for remediation of Hudson River PCBs.  She  helped found the HV Green Building and Renewable Energy Working Group, served on the board of the Hudson Valley Materials Exchange, helped start the Hudson Valley Biodiesel Coop, was Vice-Chair of the Ulster County Environmental Management Council and is a long-standing member of the Mid-Ulster League of Women Voters and numerous other civic organizations.  She has also served on the Hudson Valley Regional Packaging Task Force, the NY State Battery Task Force, the NYS Roundtable for Consensus on Tire Management, the Hudson Valley Smart Growth Alliance, EPA's Local Government Advisory Council, and for five years hosted a local weekly environmental call-in radio show, the Recycling Hotline & Environment show on WGHQ.

Working with the Hudson Valley Sustainable Communities Network (which has since become Sustainable Hudson Valley) to promote sustainable agriculture and green building and landscaping practices, Manna helped create the Finding Common Ground process to restore a healthier working relationship between area farmers and environmentalists, which resulted in a Hudson Valley Harvest "buy local" campaign and a genuine shift in agriculture in the region.  Modeling green building and landscaping practices, she built a solar-powered Sustainable Living Resource Center to host seminars and workshops and house a large collection of resources on a variety of sustainability-related projects.  Manna is also a trainer for the Natural Step Framework, a sustainability methodology for businesses and institutions.

Among many awards and other forms of public recognition, Manna was nominated as "Woman of the Year" by the Ulster County YWCA in 1996. She received the prestigious "Spirit of the Universe" award in 1997 for her commitment to Earth and to her community, the Mohonk Consultations' award for Distinguished Service and Environmental Sensitivity in June 2000, and the US EPA's Environmental Quality Award in 2011.

Manna is committed to the beliefs that humans can live in harmony with each other and the Earth, and that if your cause is just and you are persistent, you will eventually triumph.  Manna lives in Cottekill with her son Ivan, daughter-in-law Hartje, and grandson Emmett.  Her son Solomon, a Rondout Valley Hall of Fame alumnus, lives in Washington DC.